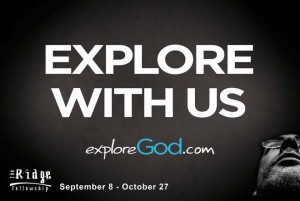 We’re wrapping up our series Explore God this Sunday.  One of the great questions of the series is, “Can I know God personally?”  I pray the following article from www.ExploreGod.com is helpful.

Is there a personal God whom people can know and experience? Some say yes. Learn more and decide for yourself.

Suppose you ask a friend for money—an amount to tide you over until you receive a promised paycheck. Your friend kindly obliges, and you both agree to terms. You have made what might be termed a personal loan.

What makes it personal? The loan exists between two persons: you and your friend. You know him, and he knows you. A relationship exists between the two of you. The loan provides context for some ongoing interaction between you.

In these ways, your arrangement can be called personal.

Now suppose you have a great respect for and knowledge of an historical figure—say, Martin Luther King, Jr. You’ve studied Dr. King’s writings, you’ve read books about him, and perhaps even spoken with persons who knew him. You can quote him and tell others about his life and work.

Is your relationship with Martin Luther King personal? Not quite. Why not?

You never interacted with Dr. King in the past, and it is impossible for you to do so now. Your connection with him would not be termed personal. Informed, yes. Inspirational, perhaps. But personal, no.

What Does “Personal” Mean?

Before we can wrestle with the question of whether or not God is personal, we must first understand the term itself.

We say something is personal when it involves relationship—particularly a binding, transactional, or socially acknowledged relationship. Furthermore, if something involves the actual presence of or interaction with another individual, then it is deemed personal. In this way, a personal relationship is not possible with an inanimate object, an intangible force, or an abstract idea.

For a thing to be personal, it must be particular and knowable. A teakettle is not personal; neither is a meteor shower nor “higher education.”

We may also describe something as personal if it involves our private life, our most intimate thoughts, or our emotions—something that touches us at a deep level. This definition is in play when we respond to a particularly probing question with the deflecting phrase, “That’s personal.”

The Christian Understanding of God

Of the many religions of the world, only three claim a singular, specific deity: Islam, Judaism, and Christianity. Each of these faiths believes that God is a being (not simply a force of nature) who can be known.

But of these religions, only Christianity proclaims a God who is relational within himself. Christians understand God as one God in three persons. The Trinity and the incarnation are exclusive to Christianity—and both are personal concepts, indeed.

The God Who Is Never Lonely

The triune God that Christians worship is three distinct persons in one being, revealed in history and in the pages of the Bible as Father, Son, and Holy Spirit.

Because of this, God was, is, and will always be in relationship. He is never alone and never lonely. His loving overture to mankind is simply the outflowing of the love that already exists within himself, for himself!

The personal salvation that Christians experience “is reconciliation with God the Father, carried out through God the Son, in the power of God the Holy Spirit.”1 God’s triune nature demonstrates the kind of personal relationship he longs to share with man.

The God Who Reaches Out

Christians worship a creator God who proactively enters into relationship with his created beings—a God who even refers to himself in the context of his human relationships: “I am the God of Abraham…the God of Isaac, and the God of Jacob,” he says, identifying with the people to whom he made—and kept—great promises.2

Christians believe that God’s promises to his people demonstrate his desire for loving, personal relationships with them. He didn’t want simply to rule over them or micromanage their behavior.

He said over and over again that his desire was for them to be his people and for him to be their God.3 Such a God is “lovingly-loyal and loyally-loving to the works of His hands. He loves what He is committed to; He is committed to what He loves.”4

The God Who Became a Man

The crux of Christianity is this: the “good news” that God became a man to save men. Christians believe that “the Word became flesh and made his dwelling among us. We have seen his glory, the glory of the one and only Son, who came from the Father, full of grace and truth.”5

What better way to relate to men than to become a man? According to the Christian belief, Jesus Christ was fully God and fully man. As a result, there is no human situation or emotion that God cannot fully understand or feel empathy toward. Jesus Christ makes God personal to man:

The God Who Pursues People

Through the ages, God’s loving overtures to mankind have compelled individual responses. Even self-professed atheists and skeptics have responded in faith to the God who lovingly pursues them.

I struggled with that for many months, really resisting this decision, going forward, going backward. Finally, after about a year… on a beautiful afternoon hiking in the Cascade Mountains, where the remarkable beauty of the creation around me was so overwhelming, I felt “I cannot resist this another moment. This is something I have really longed for all my life without realizing it, and now I’ve got the chance to say yes.”

So I said yes. I was 27. I’ve never turned back. That was the most significant moment of my life.7

Personal Stories about a Personal God

Experiences like Francis Collins’s offer the strongest evidence of a personal God. Similar testimonies have come from millions of men and women over the past two thousand years who have experienced a personal relationship with God through Jesus Christ. Those who share this experience testify that God is real and that knowing him is the adventure of a lifetime.

Ask someone who is a Christ follower  about how they came to know God. Then explore for yourself this God who knows you and wants to be known by you.

What do you think?

Lead Pastor of Upwards Church: Leander & Jarrell, TX
View all posts by dkoop →
This entry was posted in Explore God. Bookmark the permalink.