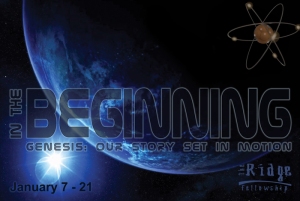 Did you see the latest Star Wars movie, The Last Jedi?  As I watched this movie with my family, it hit me later that if a viewer didn’t know the beginning of the Star Wars story the movie might be enjoyable but may not make much sense to them.  Someone who hadn’t seen the original trilogy might wonder things like:

“What is the force?”  “Is that what happens when you eat too much 3 bean chili?”

“Who is Luke Skywalker? And why is he important?”

You may not even care about this movie series and that’s ok, the only reason I mention this is to explain that the beginning of a story is very important; perhaps the most important part of the story because it explains everything that happens in the rest of the story.

The bible is best described as a story—a true story—the greatest true story ever told—but like all stories we can’t fully understand this all-important story unless we start at the beginning. And, that’s what we’re doing as a church. For the next 5 year we are studying the bible by looking at its main stories and characters. This week we start at the beginning in Genesis…the most important part…and from now through next five years we’ll do a survey of the entire Bible.

So in your bible let’s look at page 1—I always wanted to say that!

Genesis 1:1 – In the beginning God created the heavens and the earth.

The simple statement that God created the heavens and the earth is one of the most challenging concepts confronting the modern mind.

The first two chapters of the Bible describe the creation of the universe—and introduce the creature—man…but the focus is on the creator. When the curtain first rises in the first verse of Genesis, only God is there.  “God” is mentioned here 32 times in Genesis chapter 1!

If you were to drive out into the country tonight away from the lights of the city and look up you would see countless stars! In 1996, astronomers basically did that with the powerful Hubble Space Telescope. They focused its lens on a small and utterly black patch of space right next to the Big Dipper. They left the shutter open for ten days. This one exposure revealed 3,000 galaxies out beyond our own Milky Way galaxy. Each of these 3,000 new galaxies contained hundreds of billions of starts, planets, moons, comets, and asteroids. In 2004 scientists did it again. This time they focused on a patch of darkness next to the constellation Orion. They left the lens open eleven days this time and discovered ten thousand more galaxies. I could go on because it turns out the Hubble Telescope has revealed that there are over one hundred billion galaxies out there in the universe! But Genesis 1:1 and now science affirms that it wasn’t always this way! “The universe and time itself had a beginning.”[i]  Science refers to the beginning as “The Big Bang”  Genesis refers to the beginning as “creation.”  Science is not sure of it’s cause, but Genesis is clear to name the cause of universe’s existence:  In the beginning there was God!

God did not need to create the universe; he chose to create it. Why? God is love, and love is best expressed toward something or someone else—so God created the world and people as an expression of his love. We should avoid reducing God’s creation to merely scientific terms. Remember that God created the universe because he loves us.

The creation story teaches us much about God and ourselves. First, we learn about God:

We also learn about ourselves:

In our next series of posts we will look topics of science including cosmology, astronomy, physics, microbiology and evidence for an intelligent designer (God) but it is important to note that the biblical view of creation is not in conflict with science; rather, it is in conflict with any worldview that starts without a creator.

The most important aspect of the continuing discussion is not the process of creation, but the origin of creation. The world is not a product of blind chance and probability; God created it.

Genesis not only tells us that the world was created by God; more important, it tells us who this God is. It reveals God’s personality, his character, and his plan for his creation. It also reveals God’s deepest desire: to relate to and fellowship with the people he created.

God took the ultimate step toward fellowship with us through his historic visit to this planet in the person of his Son Jesus Christ. We can know in a very personal way this God who created the universe.

I hope you will continue to join us in our story of the beginning, God and creation.

[i] Stephen Hawking, The Nature of Space and Time, Princeton University Press, 1996

Stephen Hawking is the former Lucasian Professor of Mathematics at the University of Cambridge and author of A Brief History of Time which was an international bestseller. Now the Dennis Stanton Avery and Sally Tsui Wong-Avery Director of Research at the Department of Applied Mathematics and Theoretical Physics and Founder of the Centre for Theoretical Cosmology at Cambridge, his other books for the general reader include A Briefer History of Time, the essay collection Black Holes and Baby Universe and The Universe in a Nutshell.

Lead Pastor of Upwards Church: Leander & Jarrell, TX
View all posts by dkoop →
This entry was posted in In the Beginning (Genesis) and tagged Cosmology, creation, Genesis, God, Universe. Bookmark the permalink.