Before Anything – Tithe Challenge – Week 8 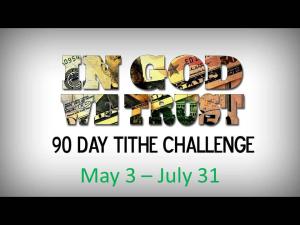 Two months down, one to go.  I am so proud of you.  The stories keep coming in! Check the comment at the bottom. I am praying for God to bless you and your finances as you continue this journey called the Tithe Challenge.

Today we will look at a passage from Genesis, the first book of the bible which means “beginnings.”   In Genesis 14 we find a man named Abraham who would become the father of the nation of Israel.   This passage records Abraham’s nephew Lot and all his belongings being a captured by an invading army.  Abraham recues him and defeats the army that plundered the area.  As Abraham and his men are returning with all their loot, they are met by “Melchizedek, king of Salem who brought out bread and wine and blessed Abraham.  Then Abram gave him a tenth of everything.”

A tenth of all of his loot, riches, and possessions right there on the spot! Who is this? Listen as Hebrews 7:2-3 describes him, “Melchizedek means king of righteousness, without beginning of days or end of life, a priest forever”   Most biblical scholars agree that this either a type of Christ, which means it is meant to illustrate a lesson about Christ OR an appearance of Christ himself.   Abraham gives Christ, 10% of everything he just earned.  Christ brings bread and wine, a picture of the sacrifice He would one day make, “this is my body… this is my blood, which is poured out for the forgiveness of sins” (Matt 26:26-27) And He blessed him.

So don’t let anyone try to convince you that tithing is from the law, it’s before.

Or that tithing is something the early church or modern church came up with, it’s before.

Or that tithing was only for the nation of Israel, it’s before.

Before anything, there was Christ. Before we pay ourselves, we give back to the One who has given us everything.  Christ is the one who gave His body and blood for us, the one who blesses us in every way.

Thank you Jesus for all you have given and before anything we want to give back to you.

Lead Pastor of Upwards Church: Leander & Jarrell, TX
View all posts by dkoop →
This entry was posted in Tithe Challenge. Bookmark the permalink.

2 Responses to Before Anything – Tithe Challenge – Week 8