A group from The Ridge Fellowship was invited by Dr Furgeson and Dr Lewis Alexander from Intimate Life Ministries to Israel.  Pictured are Lewis Alexander, my wife Niki and my Dad.

Several other pastors and ministry leaders to assess the possibility of working with and supporting some churches, schools, and ministries in the Holy Land to impact more people with the gospel.  The idea is to literally fulfill Acts !:8 “You will be my witnesses in Jerusalem, Judea, Samaria and to the ends of the earth.”

The first day we spent time in Bethlehem. Pictured above is a kindergarten class at Jerusalem School Bethlehem.  It’s a Christian school that’s serving the Arab population in Bethlehem. Pictured to the right is Jamison Creel, the school’s superintendent.  He’s from Alabama and a huge Crimson Tide Fan!  We can help this school in many ways.

Then we went to Bethlehem Bible College.  This is an interdenominational school that prepares students to become teachers, pastors, youth directors and more.  There are opportunities to partner with them to impact the Holy Land.

Pictured above is the President Jack Sara with his wife.  Below is my wife, Niki.

Then we went on to Jerusalem, below is the Wailing Wall, or Western Wall. It is all that is left after the Roman’s destroyed the Jewish Temple in 70 AD.  Many still go an pray there. 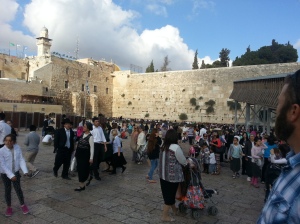 Below, we are on the Mount of Olives overlooking the old city of Jerusalem. 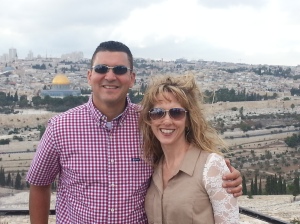 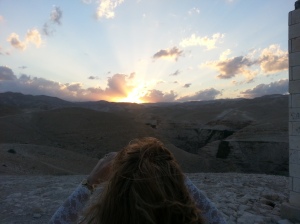 Pictured below is Skull Hill or Golgatha, it is one of the places thought that Jesus was crucified. Just out side the city walls on a busy street.  Notice the two depressions into the rocks behind Niki’s head that look like a skull. (Matthew 27:33, Mark 15:22, Luke 23:33 & John 19:17) 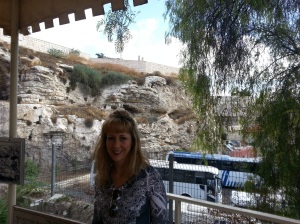 The Garden Tomb.  One of the sites where it is believed Jesus was buried.  This was a newly hewned tomb as the bible indicates with a rolling stone that went in front of it.  (Matt 27:60, John 19:41) 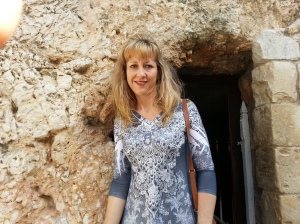 Inside the Garden Tomb, pictured below is Aaron Alexander, Lewis’s son.  He will be a basketball coach for the Jerusalem Bible School that was mentioned above.

Notice the red cross, in the back ground, its an ancient cross painted by early Christians that worshiped there.

Communion at the Garden Tomb.  below are my dad, Niki & Pastor Brian Shobert from Life Point Church in Longview Tx.

Below is Dr Lewis Alexander doing a relational training for the teachers at Jerusalem School, Bethlehem.   A contemporary church meets in that room as well.  I was privileged to give the message at the church that weekend.

The Next day we got to go the Church of the Nativity. Pictured below is the exterior. 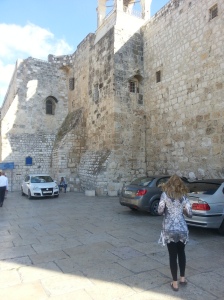 It’s thought to be the oldest church still in existence.

Below is Inside the Church of the Nativity in Bethlehem.  The church was built over the traditional site of the manger.

Below is the grotto or cave below where it is believed that Jesus was born.  In that region stables were often in caves.

Other facts that I did not know about Bethlehem in the present day:  The Christian population of Israel is about 2%.  So there is a lot of work to be done!  Of the 2% most of Christian’s live in Bethlehem.  However a wall was built around Bethlehem with strict military check points in or out.  This was due to a some fighting that took place there with the Second Intifada.

Personally I am grieved that the people there, especially the Christians are not free but literally prisoners in their own city.

The next day we headed north toward Samaria and stopped at a place called the Tomb of Samuel.  It is that place that the Prophet Samuel visited frequently near Ramah. (1 Samuel 7:15-17)

From there we went to Mount Gerizim.

In Samaria was where the Northern Kingdom of Israel was located, until it was conquered by the Assyrian Empire in 722 BC.

In the New Testament era, it was where the Samaritans of Jesus day lived and had a temple there.

This was the place that is mentioned by the Woman at the Well, who was a Samaritan.

John 4:19-21
19 “Sir,” the woman said, “I can see that you are a prophet. 20 Our fathers worshiped on this mountain, but you Jews claim that the place where we must worship is in Jerusalem.”

21 Jesus declared, “Believe me, woman, a time is coming when you will worship the Father neither on this mountain nor in Jerusalem.  NIV 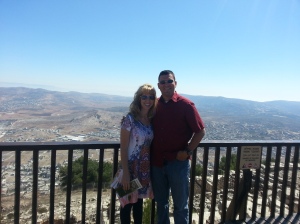 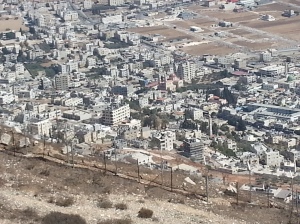 In the picture below is the capital  of the Northern Kingdom of Israel, behind Niki and I are the ruins from the palace that king Omri built.  (1 Kings 16:23-24)  It was also inhabited by the infamous King Ahab and Jezabel who also lived there.  (I Kings 18-22)

Other great work in the area is Holy Land Trust.  Pictured below with me is its founder Sam Awad.

Hebron.  where Abraham is buried, behind the green bars is thought to be his tomb. 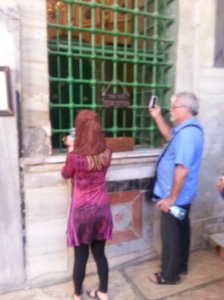 While we were there the Jewish people observed  Sukkot or the Feast of Tabernacles.  The white tent below is where a Jewish family lived for a week. (Lev. 23:34, Deut. 16:13-16) 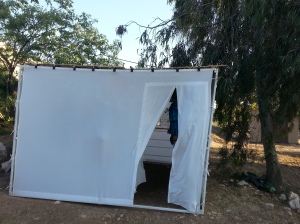 Below Church of the Holy Sepulche, thought to be the place where Jesus was buried.

The next day we went south the the Dead Sea region, in the Rift Valley.

Pictured below is the Nature Preserve at En Gedi.  The natural springs are not only beautiful, but are lush for a desert and draw lots of animals.  In the Old Testament it was one of the places David hid from Saul.  (1 Samuel 23:29- 24: 22)

Pictured with me Jamison Creel. He served as our tour guide and is the superintendent of the Jerusalem School of Bethlehem and the pastor of a local contemporary church that meets there.  He is a man of God and has a great ministry in the Holy Land. 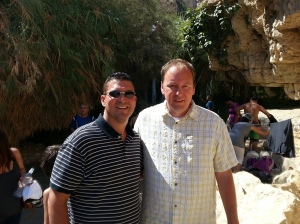 At the Dead Sea which is the lowest place on earth:  1,388 feet below sea level! As well as the saltiest body of water, 10 times as salty as the ocean.  In the bible it’s called the Salt Sea and mentioned at least 10 times.  Also near by was the community of Qumran where the dead sea scrolls were found.

Pictured below is the Mediterranean Sea, near the modern day city of Tel Aviv.  In the Old Testament  it was called Joppa.  It’s where Jonah got on a ship to run. (Jonah 1:3) In the New Testament its where Peter stayed for a time, did the miracle of raising Tabitha from the dead and saw a vision that changed his ministry focus. (Acts 9:36-11:13)

The purpose of the trip was to foster some ministry partnerships in order to return in the future.  The hope of future trips is to have half of the trip seeing sites like above and the other to serve in the schools, ministries and communities.  The Ministry leaders there said that as American believers our “presence” there speaks volumes and is an encouragement to them.  Are you in interested in going?  We will return March 11-16, 2014 which is Spring Break.