“Clergy/Laity”: Good or Bad for the Body of Christ? 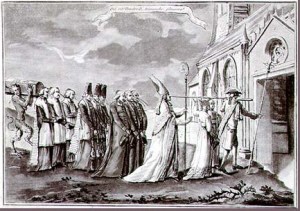 Does the New Testament teach that there is a separate class of church leaders designated as ‘clergy’ who are over the ‘laity’?  Is it biblical? Is it helpful?

The idea is that the pulpit and other church work can only be occupied by certain people – the “clergy”. The rest – the “laity” – sit in pews. In this dichotomy is a system of doing ministry whether Catholic, Protestant, or otherwise. In a nutshell: the “clergy” are paid to give and the “laymen” pay in order to receive. This distinction permeates our religious vocabulary, and unfortunately captures the heart of our practice: we pay the “clergy” to do the necessary religious activities.

This practice of dividing God’s people into two classes – pulpiteers and pew-sitters. It is a pattern that certainly reflects the hierarchical patterns of the world, but which does not square with New Testament teaching.

The Clergy’s job to keep the religious machinery going means the expectations are very high for those who wear the many hats this profession demands.

The deadly problem with this unscriptural system is that it eats up those within this role. Burnout, moral lapse, divorce, and suicide are very high among the “clergy.” Its why 1500 pastors leave the ministry each month[i] Is it any wonder such repeated tragedies occur in light of what is expected of one person? Christ never intended anyone to fill such an ecclesiastical role. In light of Paul’s remark in 1 Cor. 12:14 that “the body is not one part but many“, we should be able to discern that the “clergy” position is neither healthy for those in it, nor is it beneficial for the body of Christ.

While the “clergy/laity” distinction is embedded and assumed in religious circles, it cannot be found in the New Testament. It reared up its ugly head in the second and third century, long after Christ’s apostles died.

So kleros and laos are clearly Biblical concepts.  But there is no suggestion in scripture that the kleros are a class or group of persons distinct  or higher  than the laos.

So when did this unbiblical distinction between clergymen and lay persons come about?

Church historian Charles Jacobs, in The Story of the Church, writes:  “In the beginning most of the work of the congregation was done by people who had no official position.  It was voluntary service, freely rendered.  By the middle of the third century, it was done by the professional clergy.  Between clergymen and laity there was a sharp distinction.  The clergy, too, were divided into higher and lower grades. In the higher grades were bishops, presbyters and deacons; in the lower grade sub-deacons, lectors, exorcists, acolytes and janitors.  All of them were inducted into office by some form of ordination, and the idea of local organization had gone so far that in some churches even the grave diggers were ordained.  Thus the work of the Church was passing out of the hands of the many into those of the few, and these few were coming to be regarded as belonging to a higher class.”

Let us simply gather and serve in the name of Jesus, all Christ followers are God’s people (laos) and His inheritance (cleros).  Jesus is our great High Priest, our Head, our Teacher, and our Savior.

When I was facing burnout early in ministry, this verse helped ground me.

“It was he who gave some to be apostles, some to be prophets, some to be evangelists, and some to be pastors and teachers, to prepare God’s people for ministry  so that the body of Christ may be built up until we all reach unity in the faith and in the knowledge of the Son of God and become mature, attaining to the whole measure of the fullness of Christ.  Ephesians 4:11-13

Ministry is not done by a few but shared by all. Then we are all built up, have unity and maturity in Christ!

PS  There is still work to be done, but I want to do all I can to erase the class system by:

* Not use “Reverend” and other religious titles that reflect the “clergy/laity” distinction, or wear clothing that separates me from others: collars, robes, etc.

* Reminding others that “Clergy” roles and all the expectations that go with them are based on human traditions and not the gospel.

* Instructing that all aspects of caring for one another rest with the body, not on some spiritual elite.

* Moving away from “clergy” spoon-feeding the “laity”, to encouraging study/reading together from the Word and acting upon it. (Growth Groups!)

* Adopting a teaching style where dialogue can occur, testimonies, stories of life change and questions/insight from others are encouraged.

*Shifting in the way “church” is done from dependency on one person to creating participation from many.

For more information and history about Clergy and Laity see the sources below.

The Distinction between Clergy and Laity – Is it of God?  By Steven Hesterman

The “Clergy/Laity” Distinction: A Help or a Hindrance to the Body of Christ?  By Jon Zens

2 Responses to “Clergy/Laity”: Good or Bad for the Body of Christ?