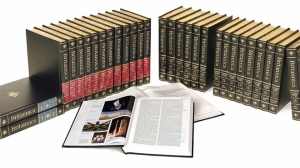 Did you ever have a set of Encyclopedia Britannica?  It was a 1000 lb set of books that once graced many homes.  This year they will no longer be printing them!  Since1768 this Encyclopedia has been printed continuously, until now.[i]

Did you ever have an encyclopedia on CD? In the 90’s when the personal computer was starting to take off, Microsoft had an entire encyclopedia on a CD that you stuck in your computer.

Like Britannica, Microsoft hired a small group of writers, supervisors and professors to write edit and verify the information.  People with Doctor’s and Masters Degrees carefully researched information, a team of writers compiled it, a group of editors corrected it and Microsoft published it.

With the CD you wouldn’t need to wrestle your way through 26 volumes to find what you’re looking for.  Now, you had all of the world’s information on one CD-ROM.  It quickly displaced the Britannica as the #1 encyclopedia in the world.  The encyclopedia was digital.

Then a few years later, the game changed again.  Encarta decreased in popularity, and was eclipsed by another encyclopedia.

Do you know what the most popular Encyclopedia in the world is today?  Not Britannica.  Not Encarta.

But here’s the interesting thing.  Wikipedia didn’t hire professors and editors to write the content.  They didn’t build a giant staff to make sure everything was correct.  Do you know who writes the articles at Wikipedia?  Everybody, not just a few somebody’s.  Regular people like you and me, not few professionals.

And you don’t have to pay for this software…it’s free.  Wikipedia, a free web-based encyclopedia, basically put Microsoft Encarta and Britannica out of business.

What’s the point?  Everybody can accomplish more than somebody.

Like Wikipedia the church is a volunteer organization…it’s the power of everybody working together!

We are not a small collection of people doing God’s work.  We are a large army of many all with important parts to play.

We are not a bunch of spectators watching a few professionals.

We are people that believe in the mission and know that we were created to join Christ in fulfilling it.

We are not kicking back on cruise while a small crew does all the work.  We are all rowing the boat in the same direction.

We serve because it’s a sense of satisfaction and accomplishment.  It’s the most fulfilling thing we do. We are changing the world one life at a time.

We don’t just go to church, we are the church.

We are a body, not one solitary member.

Everybody is greater than somebody.

Growth Groups are the best way to be connected with everybody!

Growth Group signups are going on now.  Will you join the movement?