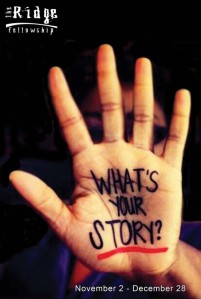 In our message series, “What’s Your Story” our members are sharing painful parts of their past such as enduring sexual abuse, rape, eating disorders, cutting, addictions and how they found hope in Christ and by being a part of a supportive and accepting church like The Ridge Fellowship.  If you attned on Sunday’s from November 2nd- December 28th at any Ridge location (or watch online: Leander or Jarrell) you will see and hear these life changing stories.  I will also be posting many of their stories here on this blog.  Here’s a story from a long time member that wanted to share anonymously. I can attest that I know this person and that their story is accurate.  She writes,

“Growing up I had plenty of examples of what it looks like to be unforgiving and not showing grace.  From a small age I felt stupid, self-conscious, intimidated, a poor self-image, and scared to make mistakes.  I was yelled at constantly and tried so hard to be perfect.

When I became a teenager, I no longer wanted to be controlled, but to escape through music, come out of my shell and be outgoing.  I’d seek admiration through friends and seek love through promiscuity.

By the time I went to college, I felt so alone without my long-time friends, and continued seeking love the wrong way.  I was ashamed of my sin and I no longer cared about my life.  Relationships didn’t fill the emptiness and I reached for a lot of pills to end a purpose I couldn’t find.  Luckily someone came to my room to borrow hairspray and saw I was sick.  My muscles in my whole body were cramped and I could barely speak to tell her what I did.  An ambulance took to me to the hospital and I was given a fluid to empty my stomach, and purged for hours on end.

I went home and was taken to therapy sessions explaining why I had attempted suicide and wondered if anyone could possibly understand.  I don’t think therapy helped resolve anything especially when my parents couldn’t and I wasn’t about to share everything I was holding inside.  Shame and emotional distance kept us from being close.

Not only did I still feel shame, but now I felt the disappointment from what I put my parents through.  I felt I was a failure working for minimum wage, living in a hotel room, and on welfare.  I sought for anyone who would care for me.  I found an older man that his only purpose was to manipulate a fragile, gullible, lost girl.  If I thought my parents were controlling, I was really in the darkness now.

He was a drunk who was obsessive, possessive, and didn’t allow me to associate with my old friends or new ones.  If I did anything in his eyes that he thought was wrong, I was punished physically.  At that point I was already suckered in, giving myself excuses thinking I deserved what I got, as I wasn’t worthy of much.  After a couple of years realizing this is not the life I want to live, I’d try to leave, but only to be suckered in for more.  I finally made the commitment to leave for good and decided moving across the country was my only escape as he would follow me if he could.

I thought I was on the road to freedom and still not a great judge of character or found any healing yet, I became involved in another relationship.  I left several times when I felt I wasn’t respected or was hurt by his actions, only to return again.  I finally left for good when I felt my life could be in danger and filed a restraining order.

I prayed for God to forgive me for my mistakes in seeking for things in life only He could give me.  I prayed that He would lead me in finding the right person for my life.  I found the right person when I wasn’t seeking, but as God led into my path.

We married and began attending The Ridge.  We both renewed our lives to Christ and were baptized together.  My life found new meaning as I kept my mind on Christ.  We attended every Sunday and I learned so much about what God wants for me and how I can put my trust in Him. Here are my favorite verses that I learned while attending The Ridge:

I know what the devil had in store for me:  10 The thief comes only in order to steal and kill and destroy. I came that they may have and enjoy life, and have it in abundance (to the full, till it overflows).  John 10:10 (AMP)

4 The weapons we fight with are not the weapons of the world. On the contrary, they have divine power to demolish strongholds.  2 Corinthians 10:4 (NIV)

2 Do not be conformed to this world (this age), [fashioned after and adapted to its external, superficial customs], but be transformed (changed) by the [entire] renewal of your mind [by its new ideals and its new attitude], so that you may prove [for yourselves] what is the good and acceptable and perfect will of God, even the thing which is good and acceptable and perfect [in His sight for you].  Romans 12:2 (AMP)

44 You belong to your father, the devil, and you want to carry out your father’s desires. He was a murderer from the beginning, not holding to the truth, for there is no truth in him. When he lies, he speaks his native language, for he is a liar and the father of lies.  John 8:44 (NIV)

I know I had a lot of growing to do, I was a mess, and a product of my past – critical, unforgiving of others, held on to bitterness, and yelled a lot.  The more I learned about forgiving myself, stopped listening to the Liar, I was also able to forgive others.  I met new people who inspired me, got involved in Growth Groups and studied the bible.

I began reading books such as, “The Root Of Rejection,” “Approval Addition,” and “Battlefield of the Mind.”  I began to feel God’s healing touch and I let my past go for good.

9 Let us not become weary in doing good, for at the proper time we will reap a harvest if we do not give up.  Galatians 6:9 (NIV)”

Thanks for sharing that story of hope.   Do you have a story to tell?  I’d love to hear it,  let me know by commenting below and I’ll be in touch with you.

Lead Pastor of Upwards Church: Leander & Jarrell, TX
View all posts by dkoop →
This entry was posted in What's Your Story? and tagged abuse, suicide, Unforgiveness. Bookmark the permalink.