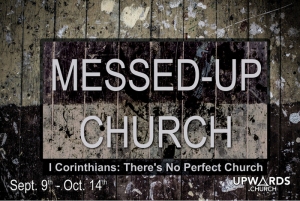 I don’t know about you but the older I get the more I find myself feeling “behind the times” when it comes to social media and technology.   Social media trends that will take over for 2018 are the “rise of augmented reality” and “chatbots.” I’m already behind! In fact, I have not gotten into Snapchat, Tumblr, Shazam, Periscope, or Pinterest.  Truthfully I have my hands full keeping up with Facebook, Twitter, Instagram and Linked-in.  With technology I increasingly feel out of step with modern culture.

I thought about this as I studied this week’s versed because it deals with another area where today’s culture makes any bible believer look like we’re behind the times and I’m referring to our society’s practices when it comes to sex.  I now embrace the clear teachings in God’s Word in this area even though the world around us considers that view to be very “old school.” That doesn’t embarrass me or phase me in the least.  I personally would choose to side with the unchanging truth that is the Bible not the ever-changing “morals” of our culture.

As a survivor of sexual predator when I was younger I know the pain, despair, guilt and shame when we don’t follow our Creator’s teachings.   It’s like C. S. Lewis put it, “They are playing in a mud puddle when there is an ocean to enjoy.” So the simple fact is people like myself who believe the Bible may be thought of as behind the times but in reality we are ahead of the game.

Many of the Christians in the church of Corinth were not ahead of the game because they were going with the flow of the sexually-charged culture around them instead of obeying God’s Word and Paul writes to correct that in the next part of his letter.   Churches like the one in Corinth met in homes scattered across the city and so Paul’s letter would be read in that setting one home at a time. Many of these Christians would have been unable to read which means the only way for them to experience the letter was if someone read it out loud.  As we look at 1st Corinthians 6:12-20, imagine 15-20 adults sitting in the first century version of a living room listening as these words are read.

13 You say, “Food for the stomach and the stomach for food, and God will destroy them both.”  The body, however, is not meant for sexual immorality but for the Lord, and the Lord for the body.

14 By His power God raised the Lord from the dead, and He will raise us also.

16 Do you not know that he who unites himself with a prostitute is one with her in body? For it is said, “The two will become one flesh.”

17 “But whoever is united with the Lord is one with Him in spirit.

18 Flee from sexual immorality.  All other sins a person commits are outside the body, but whoever sins sexually, sins against their own body.

19 Do you not know that your bodies are temples of the Holy Spirit, Who is in you, Whom you have received from God? You are not your own;

20 you were bought at a price. Therefore, honor God with your bodies.

Did anyone feel the need to fidget a bit? Anyone feel a bit uncomfortable?   I’m sure the first Christians to hear those words read aloud did. Maybe moms said to the leaders of these house churches, “We really should have had an alternative option for young children when dealing with this.  This is not something they should hear.” In any case, I’m sure Paul didn’t like to talk about the uncomfortable subject of sexual immorality but he had to because Christians were choosing to be “with the times” instead of behind them.

Of course, this part of Paul’s letter is very relevant to our situation as Christians for we live in a culture with a very distorted view of sexuality.  Here are some statistics to help us see this.

More than half of all adult single Americans have had a one-night-stand at least once in their lives – a slightly higher percentage than those who have had unprotected sex with someone whose health history and background they did not know. Regarding the number of sexual partners in a lifetime, Americans are slightly above the global average.
Most Americans have no moral objection to sex between unmarried partners.

Even our greeting card industry reflects our society’s damaged view of sexuality. There is a new type of card found in what is called a Secret Lover Collection. The publishers of this type of card say their goal is “to provide a greeting card collection with empathy and understanding, without judgment, to lovers involved in a secret relationship.” The founder of the company is a woman and she says she launched it to help the unfaithful “express their emotions,” but of course what she really wants is to cash in on this huge market. And if you’re wondering how you market greeting cards for the unfaithful the answer is very subtly. These cards are displayed under special labels like “Love Expressions,” and “intimacy.” Card messages include statements like, “I used to look forward to the weekends, but since we met they seem like an eternity.” I’m guessing this is for an illicit work romance. And for holidays, these cards read: “As we each celebrate with our families, I’ll be thinking of you.”

Before we go any further, if you have messed up in the past in this area and asked for God’s forgiveness you received it. Your sins are forgiven; they are removed as far as the East is from the West.  God buried them in the depths of the sea and remembers them no more. I mention this because a lot of Christians walk around in a perpetual state of guilt over their past especially when it comes to sexual sins. Soif that describes your situation then I want to affirm the fact that you’ve been forgiven; you’ve been washed. The slate is clean. There is NO condemnation for those who are in Christ Jesus. Sexual sin is sin but it is not the unforgivable sin. And if you are sinning in this area right now God’s forgiveness waits for you.  As someone put it, “One thing we continually underestimate about God is His loving longing to forgive.” God wants to give us all a new start. All you and I have to do is ask.

That’s a great segue back to our text because sadly many times when people sin instead of repenting they rationalize and that’s what the people of Corinth did. They justified their sexual sins in two ways the same ways people justify sexual sin today and Paul confronts them both.   We’ll look at the common rationalizations and the responses of Paul in the next post.