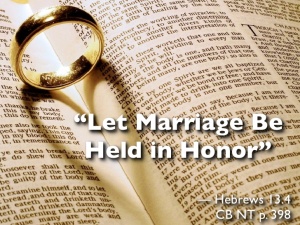 Some parents began to dread the picture that would come home the seventh week. They anxiously wondered how the publishers would illustrate the act of adultery. But fortunately, tact prevailed. Under the caption, “Thou shalt not commit adultery” was a picture of a dairyman, leering villainously, as he poured a huge pail of water into a can of milk. And this illustration wasn’t too far off the mark for, adultery is anything that weakens or contaminates the exclusivity of our marriage vows.

The Los Angeles Times (March 1, 1998) published the following definition of adultery submitted by one of it’s readers:

I like that because in my opinion, adultery is much more than improper physical relations with someone other than your spouse. Adultery is anything you do that threatens your spouse’s trust of you. Any behavior that weakens your relationship with her or him; it is any action that gets you closer to another person than you are to your mate.   Internet relationships would fit into this category.   Also Pornography.

God is no kill-joy.  God invented sex.  But like everything it must be controlled.  He wants us to use it not abuse it.  All of God’s gifts have limitations on them.  God has given us the gift of water.  We can’t live without water.  But too much of it and we’ll drown.  God has given us fire.  Fire can either warm us or burn us.  It’s how we handle it.

God has given us a sex drive.  Properly controlled and expressed within a marriage it’s beautiful and fantastic.  But outside of marriage it is destructive and detrimental to your health as a human being emotionally, spiritually and in every way.

How To Respect My Marriage

“Husbands and wives must be faithful to each other.  Heb. 13:4

At Yellowstone, they have a world famous geyser, “Old Faithful”  Why is it faithful, at a specific time period it erupts, day after day, month after month, year after year.  What if old faithful stopped doing this?  It wouldn’t be faithful any more, it would just be “OLD”   Same is true of marriage, we must remain faithful.  Continue to be as loving and kind as we were when dating or courting.  It doesn’t end after we say “I do.”  It’s like any product, if you bought a car and you wanted power windows, power locks.  What would happen after a few months and the power windows went out.  You wouldn’t be happy, because that’s what you thought you were getting.  You might call the car a lemon.  Well in dating and courting, we sometimes try to sell more than we can deliver.

Are you cultivating a friendship?  Spending time together?  It takes a lot of energy to get a friendship going, but not as much keeping it and maintaining it.  The goal we have in our marriage is to be best friends.  I heard Mary Alda, the wife of Alan Alda, the actor, one time say, “It’s real easy to leave your spouse.  It’s not easy to leave your best friend.”  We heard a pastor one time say that each of us should keep our lawns so green that it would make everybody else’s look brown by comparison.

Dr. Willard Harley says every couple has a love bank and we are making investments, committing loving acts, meeting the needs of our spouse or we are making withdrawals.  An unloving act, a selfish act is a withdrawal.

Willard Harley, a Christian psychologist, director of a network Mental Health clinics in Minnesota has spent the last 27 years as a marriage counselor.  He’s interviewed thousands of couples and discovered the ten most important needs of husbands and wives.  They are discussed in his highly recommended book His Needs/Her Needs, of studies of thousands of couples over a 27-year period:

Did you see any similarities between those two lists?  No.  No wonder we have so much trouble adjusting in marriage.  Men come in to marriage thinking for some strange reason they’ve married someone very much like themselves so they set about trying to meet the needs they have in their wife and feeling very, very frustrated when she does not respond the same way he does.

Most women come into marriage thinking they’ve married someone very much like themselves.  They set about to meet the needs that they have in a man and cannot understand why he does not respond the same way she does.

Solution:  Get serious and get down to the full time business of learning what it is that your spouse needs and determining that you’re going to meet those needs to the very best of your ability even if they are not necessarily your needs or you don’t have them in the exact same way.  This will go such a long way in protecting our marriages.

According to Dr. Lana Staneli, author of a book on marital triangles,  “of those who break up their marriage to marry someone else, 80% are sorry later, 70% get another divorce. Of the 25-30% who stay married, only half of them are happy.”   So adultery is anything but a route to happiness and bliss.

God has given us this command is to protect us from all this pain but, it is also the way to experience the greatest joy and satisfaction!

An intimate relationship between a man and woman committed to each other as husband and wife for life far outshines all other forms of intimacy.  There is a misconception in the world today that monogamous Christians are somehow sexually repressed; that sex within God’s guidelines is somehow not as “FUN”

That if you follow God’s rules and regulations in this area you miss out in some way. But this is simply not true. Obeying God in this arena provides us with the purest form of pleasure—and this makes sense! After all God designed these “earth suits” including their sexual systems. God created us in such a way that husband and wife can experience a oneness which is impossible for a man and woman otherwise. His will is that husbands and wives would enjoy a vital, regular, and mutually satisfying physical relationship. If you doubt this then read the Song of Solomon!

The latest research by social scientists is confirming over and over again that this is true. A study published by the University of Chicago (1994) came up with the following conclusions:  married couples reported being the most physically pleased and emotionally satisfied.

Again and again there has been independent confirmation like this by social scientists that God’s plan for our sexuality really does make sense. It really is the best. His detour signs don’t bind us! They liberate us to experience intimacy in it’s most fulfilling form.  The best sex is “unadulterated”

In the past fifty years, we’ve gone from a culture in which TV programs were not permitted to show husbands and wives sleeping in the same bed to the soap operas of today in which 94% of every sexual activity is between partners who are not married or not married to each other.

Our culture has come to the point that it glamorizes, defends, and promotes adultery. Katie Roiphe writes for the New York Times Magazine and says,  “Women’s magazines practically recommend [adultery] to their readers as a fun and healthy activity, like buying a new shade of lipstick or vacationing in the Caribbean.”

Adultery literally hurts people, but we rarely hear that in the world these days.  Satan is very much like an unprincipled used car salesman who will do anything to get us to purchase a car that we cannot possibly afford. When it comes to adultery he doesn’t want us to think beyond “now.”

One experienced marriage counselor took the time to actually list the agonizing consequences of yielding to the temptation of adultery. Here’s what he came up with:

“I will inflict untold hurt on my wife, who is my best friend and has been faithful to me. I will lose her respect, love, and trust. I will destroy my beloved daughters. All their lives, they will hurt if I do this. I might lose my wife and children forever. I will shame my family….my parents….my siblings. I will destroy my example and credibility….others may follow my example and yield to this sin. I will lose my own self-respect. (Though God could forgive me, could I ever forgive myself?) I could form memories and flashbacks that plague future intimacy with my spouse. I could cause a pregnancy that would be a lifelong reminder of my sin.”

You possibly can think of things to add to this list because the road to adultery is a road to unbelievable pain and anguish.

Lets’ be faithful in our marriages.