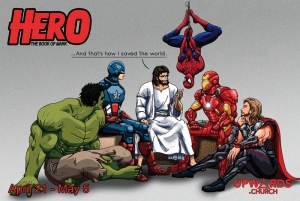 Do you remember where you were when you heard the news of major historic event just happening?  I’m dating myself, but remember while I was at a skating rink that news of Elvis Presley’s death (August 16, 1977) was shared over the loudspeaker.  I was in a high school history classroom when our teacher put on the news coverage of the Challenger disaster on January 28, 1986.  Do you remember where you were and how you felt when news broke about the terrorist attack on the twin towers September 11, 2001?   These and other events affect us powerfully, but all of those events pale in comparison to the most incredible event in all of history the awesome return of our reigning hero Jesus Christ!

The first time Jesus came mostly unnoticed into the world, the next time “every eye will see him.” In his first coming Jesus humbled himself, being born in a stable in Bethlehem. When he returns, he will come back as “King of Kings and Lord of Lords.” In his first coming he endured the mockery of men who despised him for his goodness. Although he was the Son of God, he allowed them to put him to death, that He might thereby provide salvation for the world. When he comes again, all mockery will cease for he will rule the nations with a rod of iron. He came the first time as the Lamb of God; he comes again as the Lion of the Tribe of Judah. Two thousand years ago the religious leaders shouted in scorn, “He saved others, but he can’t save himself!”  The day is coming when the whole world will see Jesus as he really is. When that happens, every knee will bow and every tongue confess that Jesus Christ is Lord, to the glory of God the Father (Philippians 2:9-11).

For Jesus’ first coming the word HUMILITY might best describe that historical event.  For His second coming, POWER and glory.  Nothing will be more spectacular than the triumphant return of our victorious hero!  Though He was once “despised and rejected of men,” He will one day return “in power and great glory,” heralded by angels and accompanied by his saints.

The return of Jesus and end times is known in theological terms as Eschatology, the study of last things.

In eschatology, it is important to remember that almost all Christians agree on these three things:

The question that causes differing opinions is, “when does the Rapture occur in relation to the Tribulation and the Second Coming of Christ?”

All beliefs have biblical validity and we shouldn’t fight or argue about which belief is best the most important thing to remember is Jesus is returning in power to take His church (believers, you) with Him to heaven for all eternity!   Our part is to be watchful and ready.   Are you ready for Jesus to return?