God is Speaking, Are We Listening? – Jonah 1

The word of the Lord came to Jonah, son of Amittai: Jonah 1:1

We don’t know what method God used to speak to Jonah. For Moses He used a burning bush…for Elijah it came as a gentle whisper. For Obadiah and others it was through a vision. We don’t know HOW He spoke to Jonah but we DO know that He did. And this is just like God…History shows that He is always speaking to people like you and me, guiding us through life in ways that allow us to know His will. In Isaiah 58:11 it says, The LORD will guide you continually. In Psalm 32:8 God says, I will instruct you and teach you in the way you should go. One of the verses I have clung to in life is Isaiah 30:21 where it says, Whether you turn to the right or to the left, your ears will hear a voice behind you, saying, ‘This is the way; walk in it.’

I have seen these scriptures fulfilled numerous times in my own life as God has told me what vocation He wanted me to pursue, who He wanted me to marry, when to start a church and where. Each week He helps me prepare a message, lead staff, lead meetings and lead HIS church. He helps me love when I don’t want to.  When I face difficult decisions or conflict and don’t know what to say, if I ask, He always gives me the wisdom and words I need to use.

I’m not sure I can explain HOW God speaks to me but He does! It’s not usually an audible sound. In fact it’s better than that because I hear Him speak in my innermost being. This means He communicates His intent to me…even in the midst of turmoil when I might not be able to hear audible sound. I’m saying that since I am a Christ follower, God has a direct line into my heart. And it has come to the point that I yearn for His gentle voice. I can’t imagine having to guess at what I should do or say in life. I don’t think I could bear the loneliness of feeling that I’m alone and without a higher guidance. If you are a Christian who has learned to rely on God’s spoken guidance and companionship, then you know what I mean.

He may ask us to do things that we don’t want to do and that is what happened to Jonah.  God told him to go to the people of Nineveh and declare His judgement on them because of their wickedness. 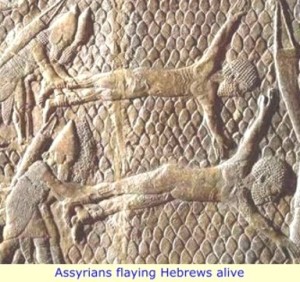 The Assyrian Empire was well known in all of the ancient world for its wickedness and cruelty. One of their kings, Ashurbanipal was accustomed to tearing off the lips and hands of his victims Another Assyrian ruler, Tiglath-Pileser, flayed victims alive and skinned victims alive. The soldiers in the Assyrian army had no qualms about scorched earth military tactics. Typically after destroying an enemy’s fields and cities, they slaughtered the conquered people or hammered iron rods through their noses or lower lips and led them away as slaves. Now, Isaiah had prophesied earlier (7:17) that the Assyrians would successfully invade Israel; and, Jonah of course was familiar with this prophesy. 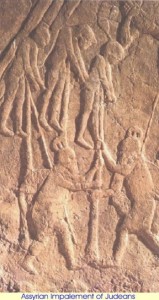 In Jonah’s day the Assyrians were making forays into the northern kingdom of Israel…sort of pre-invasion attacks. When the Assyrians were doing this…penetrating into a nation they hoped to conquer, they would make a surprise attack upon the city, take captive the women, and then brutally slay the men and children.  Jonah lived in a northern town so perhaps he had personally witnessed some of these attacks. He may have seen his own father and mother brutally slain before his eyes or he might have seen his sisters raped by the Assyrian troops.

I tell you this so you can comprehend Jonah’s hatred of the Assyrians. He understandably wanted nothing to do with helping these brutally wicked people. He knew that if he preached the sermon God had given him to the Assyrians in their capital city of Nineveh there was a chance that they would repent. And if they repented, Jonah knew that our compassionate God would forgive them. Listen to what Jonah said in verse 2 of chapter 4 after that indeed had come to pass, I knew that You are a gracious and compassionate God, slow to anger and abounding in love, a God Who relents from sending calamity.

In his hatred for the Assyrian people Jonah did not want that to happen. Like you and me, so often when we are wronged we don’t want to forgive. Instead we want our oppressors to be punished. We want them to hurt at least as much as they hurt us.

We must learn to yearn not for the punishment of our enemies but for their repentance and the restoration that comes with it. Remember, in Ezekiel 33:11 God says, I take no pleasure in the death of the wicked, but rather that they turn from their ways and live. As author Phillip Yancey says, the reason the gospel is good news in the first place is because, …the free offer of God’s grace extends not just to the undeserving but to those who in fact deserve the opposite.

In II Corinthians 5:16 Paul reminds us that once they embrace God’s grace all believers should, …regard no one from a human point of view. This means that once we become Christians we must look at people not from our own perspectives of hostility. We no longer evaluate them based on our own sensitivities. We learn to view people—all people—the way God does—from a heart of love. We must trust that God sees more than we see. He is able to look at the heart of an individual which is how He knew that the people of Nineveh were ripe for repentance. God looked deep and saw that if the Assyrians heard from Him they would respond and this is why He sent Jonah to these wicked people in the first place. But Jonah didn’t want any part of this. In fact, his hatred of these people consumed him such he abandoned his call to be God’s prophet or spokesman.

God asking Jonah to go to Nineveh would be like him asking you to go to ISIS or North Korea. Even the threat of abuse, torture and death you had to tell them to change their ways.

Jonah couldn’t stand the thought of these people being forgiven and coming into relationship with His Heavenly Father so he reacted with the heart of a jealous, unforgiving son and disobeyed.

Now I think if we are honest with ourselves we will have to admit that we are often just like Jonah. We defy God when He guides us in directions we don’t want to go and it is for this reason that I think it is so important that we study this text because we can learn a great deal about the DANGERS of disobedience from Jonah’s experience. This leads us to another lesson we can learn from this little book:

God told Jonah to go east to Nineveh and which direction did he go? WEST. He headed for the port of Joppa and when he got there he just happened to find a boat heading in the right direction.

In fact this boat was bound for the Spanish fishing village of Tarshish which was the westernmost town in the known world at that time. To reach it would require a journey of a year and a half. It was literally as far as Jonah could go in that direction away from Nineveh.

Now, do you think it was a coincidence that there just happened to be a boat heading in that direction at that time? I don’t, because the devil always makes it easy for us to disobey God. In Matthew 7:13 Jesus warned us of this when He said, Wide is the gate, and broad is the road that leads to destruction and many enter through it. If you want to disobey God; if you want to do things that are against His will you can make that choice and count on plenty of opportunities.  But be forewarned; satan will never do anything to help you get anywhere but closer to pain and heartbreak, which is exactly what happened to Jonah.

In the next post we’ll examine more about God’s work in the world and look at the fact that he is in control:  of the ocean, of a pair of dice, a large fish and many circumstances around us.

2 Responses to God is Speaking, Are We Listening? – Jonah 1