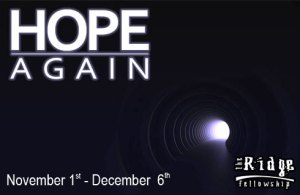 In the last post we discussed that confidence is not ultimately found in heritage, religion or social status but by knowing Christ.   Now how do we keep our confidence?  Here are three ways:

A lot of people are afraid to admit their weaknesses because they are more interested in pretending they have arrived.  Sometimes you have to choose between the two — Do I want to appear confident?  Or do I want to be confident?  Confidence is kept through honesty.

Our church is a church for imperfect people.  Like Paul, we say, none of us have arrived.  We don’t need perfect people in this church.  We are people who are growing, people who admit we don’t have it all together.

Paul was honest about his faults.

To me, that’s an amazing statement, because Paul is an old man now.  If anybody had the right to claim he had arrived it would be Paul.  He wrote most of the New Testament.  He single handedly spread Christianity throughout the Roman Empire.  He made an incredible impact on the world.  Yet Paul, at the end of his life, says “I don’t have it all together.  I haven’t arrived. I’m not perfect.  I’m still growing.”

The point is, confident people never stop growing.  They are always developing, growing, expanding, and learning.  Even when he gets to be an old man, in prison, he says, “I haven’t arrived.”

That is so contrary to people today.  Many people will give you the impression that they never have any problems.  They are sinless perfection, no problems or doubts!  I get indigestion from those kinds of people.  The longer I grow as a follower of Christ the more acutely aware that I am of my own inadequacies, limitations, weaknesses and faults.  Rather than saying “Look how far I’ve come,” I have to say, “Look how far I have to go!”

13 No, dear brothers and sisters, I am still not all I should be, but I am focusing all my energies on this one thing: Forgetting the past and looking forward to what lies ahead,

Paul says if he is going to be all God wants him to be he’s not going to waste any more time on yesterday.  It’s gone.  It’s past.  My past is past.  I let go of my guilt, grief, grudges.  I let go of the past so I can get on with the present.

Do you continue to rehearse things in your heart that God has long since forgiven and forgotten?  Some people won’t forgive themselves. They’re holding on to the past.  Everybody here has blown it.  We have things in our past that we regret.  Paul, of all people, probably had many regrets that could have haunted him.  The Bible says in his B.C. days he was a persecutor of the church.  He hounded people who were believers.  He held the coats of the men who stoned Steven, the first martyr and probably enjoyed it.  Paul faced his faults and forgot the former so he could get on with life.

Nothing you ever do will change your past.  No tears, regrets, self-pity.  The past is past, over, dead.  You can’t do anything about it.  Let it go.  Learn from it and let it go.

Another thing to not dwell too much on is the successes.  It’s so easy to rest on your laurels, to live in the past, to base your security on past performance, to think, “I’ve got it made!”  “The good old days” are done with.

The problem with success is that it tends to make you complacent and fills you with pride.  Then you stop growing and learning and then you’re going to fail.

Are you continuing to allow the past to control your present? Are you allowing a past memory to hurt you now?  Your past cannot hurt you unless you let it.  Learn from it and let it go.

This is a church where we don’t care about your past.  I’m interested in what direction are you headed right now.  That’s what matters.  Not yesterday but today.  If God only used perfect people nothing would get done.  It matters where you’re headed now.  What counts now?  What’s the direction now?  Thirdly,

14 I strain to reach the end of the race and receive the prize for which God, through Christ Jesus, is calling us up to heaven.

Absolutely nothing worthwhile in life happens without effort.  The only way you coast is when you’re going downhill.  If you’re coasting in life right now you’re headed downhill.

The great people in life are just ordinary people with extraordinary amount of determination.  They don’t know how to quit.  They keep on keeping on.  They never give up.

I hate the word “quit”.  It sounds like such a losing word.  I don’t like the word “impossible” either.  God says all things are possible.  Yet the world is full of quitters, people who cop out at the drop of a hat.  They give up on their marriage, their kids, relationships, dreams.  Paul said “I am not going to quit.  No matter what happens, I’ll never give up.”  I want God’s best for my life and I’m going to complete what He’s called me to do.

Notice the terms Paul uses “I strain” Feel the intensity of Paul here, the determination in the Greek it literally means “I over extend myself.  — I go for it with all I’ve got. I throw myself into it, straining with every nerve and ounce and muscle to reach the prize.”  He’s a man of intensity, maximum effort.

What would happen if Christ followers would put as much energy into growing in Christ as we do into our hobbies or favorite sports?

This is a church that focuses on the future.  We have a mission, “KNOW Christ and GROW to be like Him… and then SHOW Christ to our world.  To take the good news of Jesus Christ to everybody in this community.  As long as there is one person who doesn’t know Christ we will continue to focus on that goal.  This is a church where we do not quit.  We do not quit on people and we do not quit on things we know to be the will of God.

I need a power outside of myself to let go of the past and to be able to focus on the future and to have the power to keep going, to keep on keeping on to do the things I know to be right.  You do too.  That comes in a relationship with Christ.  Christ gives me confidence and He helps me keep my confidence.

1 Response to Keeping My Confidence