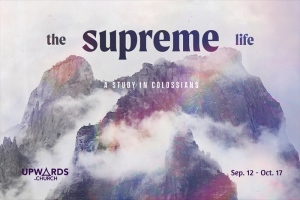 A parent’s worst nightmare is their child not coming back from school. Unfortunately, kidnapping statistics show that this nightmare turned into reality for many families, as they suffered such a worse-than-death fate not to see their beloved kid ever again.

I want to do everything in my power to make sure to protect my family from being kidnapped.

Using the same language our passage today issues a warning of being kidnapped spiritually.  No one can snatch us away from the love of God, but we can allow ourselves to be taken away into captivity and lose our freedom.  How does this happen?

Let’s look at our text together:

8 See to it that no one takes you captive through hollow and deceptive philosophy, which depends on human tradition and the basic principles of this world rather than on Christ.  Colossians 2:8 (NIV)

The words “take you captive” means, abducted, kidnapped, bound and carried away causing you to lose your freedom.

Does this sound at all vaguely familiar to something that comes down the pipes these days?  It’s exactly the same.  This is the kind of philosophy that the Gnostics propagated.  Contact with angels.

This kind of New Age teaching is what was permeating the church at Colossae.  This was the threat they were facing, this concept of a philosophy that was manmade and promises to move you above yourself.  Doesn’t New Age philosophy promises to move you out of yourself?  Move you to the god within you?  It sounds so humble.  It sounded humble when the Gnostics talked about it.  “I can’t go to God.  I have to go through angels.  I can’t possibly approach God.  I have to go through an angel.”  It’s the ultimate form of pride because it says God in His revealed word doesn’t tell the truth.  God in His revealed word says there is one mediator between Him and man, the man Jesus Christ.  No angels, no spirit beings, no spirit guides, No looking deep inside.  It’s you going to Jesus Christ and making a connection with God.

The truth is that Jesus is the mediator.

Paul says in those verses 20-23 that it looks real good on the outside and other people who see that you do those kind of things, practice that form of extreme self denial Paul says it looks so good on the outside.  People will think you’re so super spiritual.  But what little you gain by that is completely lost in the end because in God’s eyes it means nothing.  So really you don’t gain anything by practicing asceticism.

The true teaching is the contrast that goes with these.  No matter how elaborate or complex these philosophies were they all had one thing in common.  They were very empty and hollow.  He says back in verse 8 “These philosophies are hollow and deceptive.”  *It’s like those chocolate Easter Bunnies.  They look so cute on the outside and you take a big bite and there’s absolutely nothing but air.  What a let down!  That’s what happens if we look to philosophy of human origin.  Mankind’s thinking.  It’s empty.  It leaves you with nothing.

Paul says in contrast the truth is in Christ you have everything.  .  Verse 9 “For in Christ all the fullness of the deity lives in bodily form. You have been given fullness in Christ who is the head over every power and authority.”  One of the translations says, “I am complete in Christ.”

The Greek word for “fullness” is pleroma.  It was a word that Gnostics liked to use because it meant fullness.  They thought that pleroma was what they were looking for.  It meant all the fullness of deity.  They thought that by going through the angels one step at a time that they could get to that pleroma.  And Jesus Christ was like the ABCs.  He was for the people who were just getting initiated.  He was one of the little stepping stones that could get you to pleroma.

But God says, no.  Rather than Jesus being a stepping stone to fullness, completeness.  Jesus Christ is fullness, He is completeness.  Because He contains all of God.  Jesus is part of the trinity – Jesus, the Father, the Holy Spirit.  Each one of them is fully God.  They have separate personalities but each one is fully God.  *So when you have Jesus Christ you have God.  You have everything you can possibly need.  You don’t have to search for anything else.  You don’t have to search for pleroma.  It is in Him.