Overcoming Incompatibility in My Marriage

Incompatibility is certain in every relationship.

G. K. Chesterton wrote, “If we can be divorced for incompatibility, I cannot understand why we are not all divorced.  I have known many happy marriages but never a compatible one.”

How are we Incompatible?

God created every cell in our body differently! Males have that “Y” chromosome and there starts all the trouble!  With some humor, let’s enjoy some of some differences:

Women typically are much more verbal.

In fact one study took a group of 2-4 yr. olds and recorded them at play. The study found that almost 100% of the girl sounds were understandable verbal expressions, while around 50% of the boy sounds were unintelligible noises, like Brummmm. eeerrrrr.

I like author John Trent’s animal descriptions, the Lion, Otter, Beaver and Golden Retriever.    The Lion is the take charge, natural leader, very opinioned and driven.  The otter loves fun, games, talking and gains strength by being around others.  The Beaver is organized, structured, and thinks a lot.  The Golden Retriever is loyal, sensitive, likes to listen and to help others.

You probably married the opposite of you.

INCOMPATIBILITY, HOW DO I HANDLE IT? 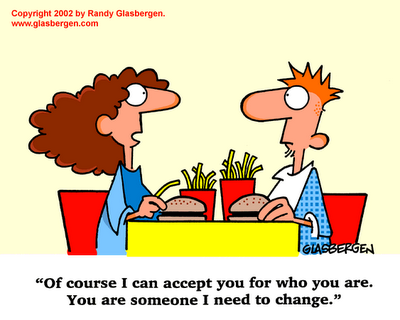 Romans 15:7 “Accept one another, then, just as Christ as accepted you, in order to bring praise to God.”

Christ is our model of what acceptance means. When we realize that Christ accepted us, as unlovely and sinful and immature as we were when we came to him then we can learn to accept our spouse in the same way.

During our first years of marriage, I was trying to force Niki to be more like me instead herself.  I would say and think, “If you can be this way, things will be better!” I soon realized just how unfair this was and how it wasn’t working.  I had to learn to accept her, not change her.

All those things you thought were unique and interesting and caught your attention, now irritate you.

It’s easy to say, “We’ve got nothing in common!”  We must create things in common.

Ecclesiastes 9:9 “Enjoy life with your wife whom you love.”

To help couples find things they enjoy doing together Dr. Willard Harley designed a Recreational Enjoyment Inventory that couples can fill out it has hundreds of activities with ratings that the husband and the wife fills out.  From strongly dislike to strongly like.  Click here to see.

Dr. Harley suggests couples spend about 15 hours a week together.

The couple that plays together will stay together.  The payoff is closeness and shared interest.

When you eat, you don’t eat with two spoons.  One is not needed.   You need to have some diversity.  You won’t agree on everything.

Differences are not wrong they’re just different.  Two people can be different and still neither is wrong.

We are told to appreciate and celebrate our differences.  The Apostle Paul uses the human body as an illustration of this fact.

There is no unimportant part of the body. The foot may not be able to run up and down the piano reproducing the music of Mozart, but without the feet, the hands will never get to the piano.

The same is true of the differences we have as husband and wife.  We are not to think we are superior or better both are needed both are important.  Celebrate those differences.  Divide labor accordingly.   In our marriage, Niki loves math and numbers, she made A’s in math, I just barely passed! Niki does the financial books in our house. I like to work in the yard.

Incompatibility is certain, but it doesn’t have to destroy your marriage.

Leadership magazine ran an article a few years ago that read: “The space shuttle Discovery was grounded recently — not by technical difficulties or lack of government funding, but by woodpeckers. Woodpeckers found the insulating foam on the shuttle’s external fuel tank irresistible material for pecking. The foam is critical to the shuttle’s performance. Without it, ice forms on the tank when it’s filled with the super-cold fuel, ice that can break free during liftoff and damage the giant spacecraft. The shuttle was grounded until the damage was repaired.

Marriages are frequently damaged by the little things. Criticism, lack of respect, misunderstanding and taking each other for granted peck away at the relationship and keep us from reaching the heights.

A marriage definition, “Two imperfect people in an impossible relationship”

But the bible says, “Nothing will be impossible for God” Luke 1:37

With God, He can make your impossible relationship possible.

Lead Pastor of Upwards Church: Leander & Jarrell, TX
View all posts by dkoop →
This entry was posted in Relationships, the Best Mess. Bookmark the permalink.

2 Responses to Overcoming Incompatibility in My Marriage