Christ is Greater – Introduction to Hebrews 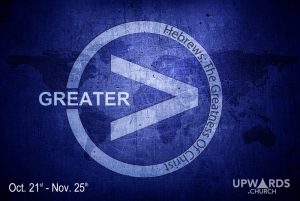 We’re diving into the wonderful epistle to the Hebrews.  Husbands and wives have you ever had a disagreement over whose job it is to brew the coffee every morning?  The Bible says it’s the husband’s job. This says He-brews, not She-brews!

The book of Hebrews uses the word “greater” 6 times and “better” 11 times to describe who Jesus is and what he has done for us.

People in our world are asking life’s big questions:

The book of Hebrews was written to a group of persecuted Christians, Jewish Christians.

They were asking those big questions, because life was very hard.

And so this letter was written; with a clear message for them, but also for us today:  The answer to all of our questions is JESUS!   Jesus is the main topic of Hebrews.

And you’ll see that theme developed as we work through this book. Some of us have been attending church a long time.

We may know basic theology. We may know how to navigate a potluck or a communion.

We might even be able to pray in public.

But I’m often amazed at little Christians know about Jesus.   Hebrews will teach us a lot about Jesus.

Only God knows who wrote this book.   Some think it’s Paul, but Paul began every one of his letters by identifying himself in the salutation. Like, “Paul, and apostle of the Lord Jesus Christ to the saints in Corinth.” His usual greeting was “grace and peace be unto you.” This letter has neither his name nor his trademark greeting.

There are many theories about who could be the author of Hebrews. Some speculate Barnabas, Apollos, or even a woman named Priscilla!  I won’t go into the theories because when it comes down to it, God is the author of all of scripture. Whoever may be the writer; he or she got one thing right—that Jesus Christ is GREATER than anything or anyone else

1  In the past God spoke to our forefathers through the prophets at many times and in various ways, Hebrews 1:1 (NIV)

The author starts with a big picture statement to begin building their case.

In the past, God spoke many times.

When we read that, it immediately raises some questions.

Who Did God Speak To?

This letter is written by a Jewish author to a Jewish people.

And so they write, “our forefathers”.

And any good Jewish man or woman could have immediately pulled up some famous examples.

And when we read the Bible we might get the idea that God spoke directly to everyone, but that’s not true.

Most people heard God speak through prophets and priests.

And that’s what vs. 1 tells us. But an important question to ask is

Why Does God Speak To Us?

Lots of reasons! We could suppose God has things he wants us to know. That’s reasonable.

It’s essential to realize that God has spoken to people then and to us today because He wants to know us and be known by us.

Our God is a personal God, that wants a personal relationship with us. That’s why he spoken to us, he not a mystery.

He’s not a concept. He isn’t distant and unavailable.

Imagine if God had remained silent?

And there are many who live like that right now.

They need to know that God has spoken, and hear what he has to say!

If God spoke many times and in many ways to the Old Testament people.

What did he say?

How could we summarize all that was said in the OId Testament?

The prophet Jeremiah was told of a new Covenant nad a new day promised by God.

When we hear Last Days we may start thinking about end times.

But Last Days in our Bibles simply refers to the time from Christ’s ascension to his return.

The Old Testament people were living in the days of God’s promises…when he was preparing people for something new.

The writer of Hebrews says the waiting is over! God has spoken again, to us, with something new to say.

What Has God Spoken To Us?

Throughout history God’s main communication method was through the Old Testament prophets. But once Jesus came to planet earth God said, “This is my final way to talk to you, through my Son, Jesus.”

Since Jesus, there have been others who have claimed they got the final message. Six hundred years after Jesus was born in Bethlehem, an Arabian man named Muhammad claimed to have received a final message from God. He wrote it down in the Qur’an. He claimed his revelation superseded that of Isa, or Jesus, who was considered a great prophet.

In 1830, Joseph Smith claimed he received a more final revelation from God, a new gospel.  It is called the Book of Mormon. But with apologies to our friends the Muslims and the Mormons, Jesus is the final Word from God.

God is still giving fresh new illumination to the study of His Word, but it’s important to understand that God isn’t giving in any new revelation of His Word. So when we hear anyone saying “God told me something” we should be very skeptical unless what they say completely agrees with scripture.

In the Old Testament God spoke many times in many ways, in the New Testament God has spoken to us by His Son. One message through one messenger….Jesus Christ.

We’re going to see a bunch of this kind of “then and now” comparisons in the book of Hebrews.

And what we’ll discover is that everything God promised in the Old Testament was fulfilled in persona and work of Jesus Christ!

That means that Jesus is:  a big deal.

In these last days, God has given us the last word, and it’s a word about his Son, Jesus.

In the next post we will see 7 Facts about Jesus.