Have you ever wanted a second chance? Or wished that you could start all over? I have and whether we said or did something we regretted we often need another chance and that is exactly what God gives to us!

“Then the word of the Lord came to Jonah a second time:  Jonah 3:1

Although we never get back the time we wasted in in running from God and there are still consequences for wrong behaviors but through God’s grace when we change our mind we get a chance to start over…to begin again. And that is good news for all of us isn’t it?! Because each of us at one time or another has wished that we could have another shot. We have made mistakes in our finances, our careers, our parenting, our marriages….which lead us to wish we could have one more chance. One time or other we have all longed for the opportunity to begin again.

When we humbly admit our wrongs like Jonah did and express a desire to change, God helps us start over. Throughout the Bible in fact we see God doing this for several people who asked for a second chance: Abraham, Jacob, Moses, King David, Peter, John Mark. Each of these great men had failed in one way or another but they changed and asked God for another shot and He gave them one! This is because ours IS is the God of the 2nd chance. He wants very much to forgive us and help us start anew. John Ortberg says,

If there is one way that human beings consistently underestimate God’s love, it is perhaps in His loving LONGING to forgive.

God’s love for us—His desire to help is start anew—is why He sent His only Son to die for us in the first place. He knew that this was the only way we could have our sins washed away and start clean.

Warren Bennis once wrote of a promising junior executive at IBM who was involved in a risky venture for the company and ended up losing ten million dollars in the gamble. He was called into the office of Tom Watson Sr., the founder and leader of IBM for 40 years, a business legend. The junior exec, overwhelmed with guilt and fear, blurted out: I guess you’ve called me in for my resignation. Here it is. I resign. Watson replied, You must be joking. I just invested ten million dollars educating you; I can’t afford your resignation.

I think this illustrates why God longs for us to change our ways: so He can forgive, so He can be faithful and just to cleanse us from unrighteousness, so He can cast our sins as far as the east is from the west and remember them no more, because He has invested the life of His only Son to make it possible for us to begin again.

As Jonah discovered, when we repent we can start over…no matter what mistakes we have made. This is what II Corinthians 5:17 says, If anyone is in Christ he is a NEW creature; the old things have passed away; behold all things have become new.

And the pain Jonah endured in the storm and in the belly of the fish worked to his advantage. It not only led him to renew his vow to be God’s prophet. It also made people stop what they were doing and listen to his message!  Why did they listen as Jonah stopped at every street corner to deliver his sermon?    I think one reason was because Jonah’s 72-hour fish stomach acid bath changed his appearance. His skin was probably bleached white, as was his hair, unless the acid burned it off completely. To me it’s like the image of Darth Vader in Return of the Jedi when he took his mask off.

Several commentary writers go so far as to say they believe that Jonah’s disgorging from the great fish was witnessed by others who happened to have been spending the day at the beach or all the trade workers when he arrived.   If this is the case then the story of his experience must have preceded him to Nineveh via caravans or traders and made people all the more anxious to hear what he had to say. 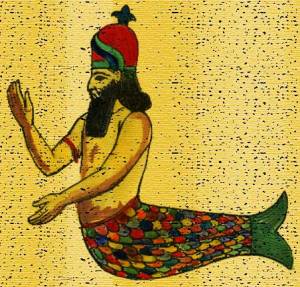 Also one of the gods of Mesopotamia worshipped by the Canaanites, Babylonians and Assyrians was Dagon which looked part human part fish!  So can you imagine what people were saying? I’m sure the nightly newscasts said something like, “Jonah a powerful prophet who has just spent three days inside a huge fish god is coming here with a message.  Stay tuned for more details.”  So when he arrived and began preaching, you had better believe that they listened all as a direct result of the tough time Jonah had endured.

And God does the same thing with our pain. He takes the bad in our life and uses it to His advantage. As Paul says in Romans 8, “We know that in all things God works for the good of those who love Him, who have been called according to His purpose.”

I don’t know about you, but I listen to people who have gone through great difficulties. I tend to believe them when they say God will help us when we have to endure tough times. For example, David Ring was born with Cerebral Palsy. Because of this disease he walks with a limp and talks in a stilted fashion. But he is a powerful evangelist who keeps audiences spellbound. He says, “I’m like E. F. Hutton. When I talk people listen.” He challenges others to be more faithful in their own evangelistic efforts saying, I have cerebral palsy. What’s your excuse?

Jonah learned, when we repent of our sin, God redeems the experience and uses it for His glory and this leads to another thing Jonah learned from his sermon.

Jonah 3:3-5   “Jonah obeyed the word of the LORD and went to Nineveh. Now Nineveh was a very important city-a visit required three days.  On the first day, Jonah started into the city. He proclaimed: “Forty more days and Nineveh will be overturned.”  The Ninevites believed God.” 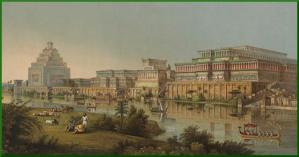 When Jonah crested the final hill and saw Nineveh in the distance he must have been overwhelmed because, as it says in our text, Nineveh was an exceedingly GREAT city and it was. In Jonah’s day Nineveh was very impressive…especially to a country preacher from the hills of Palestine. The Bible says that Nineveh was so big that a visit required three days. This is because the greater Nineveh area included five surrounding cities together which were 60 miles in circumference. There were great aqueducts and canals, huge gardens. There was even a library from which archeologists have discovered 16,000 volumes…some of which describe creation and the flood. Nineveh proper was surrounded by a huge wall 10 stories high and wide enough on the top for three chariots to run abreast. 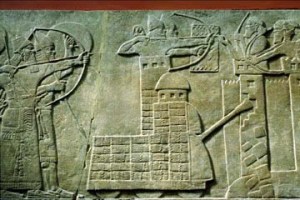 There were 1500 towers equally spaced around the wall each 20 stories tall. These towers served both as watchtowers for any approaching enemy and as storehouses for weapons. These weapons could be transported quickly on chariots or wagons that would speed around the top of the wall to places where they were needed in time of attack. The combined population of the area must have been between six hundred thousand and a million. We can guesstimate this based on the fact that God said in chapter 4 that there were 120,000 who didn’t know their right from their left—a possible reference to children. So, Nineveh was no insignificant place and Jonah must have thought,  How can I alone have any impact on a city this size? Besides they obviously already have everything they need, so why would they listen to me?

In the next post we’ll look at why they would listen and see that not only did God give Jonah a second chance he also loves to give our enemies a 2nd chance!