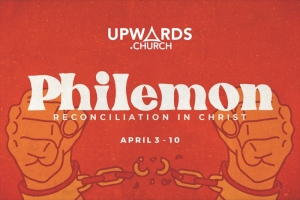 Our current series is based on the New Testament book of Philemon.   Philemon is about a run away slave named Onesimus who is returned to his master Philemon.  It’s a personal letter written from the apostle Paul to Philemon with an appeal to receive this run away not as a slave but as a brother.   Slavery forms the backdrop to Philemon, and it is difficult to fully appreciate the book without some understanding of slavery in the Roman Empire.

Slavery was taken for granted as a normal part of life in the ancient world.  The whole structure of Roman society was based on it. “Slavery grew with the growth of the Roman state until it changed the economic basis of society, doing away with free labor, and transferring nearly all industries to the hands of slaves” (Marvin R. Vincent, The Epistles to the Philippians and to Philemon, International Critical Commentary [Edinburgh: T. & T. Clark, 1979], p. 162).

During the period of the wars of conquest, most slaves were war captives. The number of slaves was enormous, making up as much as one third of the population of the Empire.  People could become slaves by being born to a woman who was a slave, as punishment for a crime, by being kidnapped from another land, and by being conquered by another nation (slave dealers would buy captured prisoners and send them to the slave markets to be sold for a profit). Sometimes, however, parents would sell their children into slavery. And some would voluntarily become slaves in order to pay a debt.

Usually those with financial means would own slaves. How slave owners treated their slaves could vary greatly, depending on the temperament of the owner and the performance of the slave. Owners could inflict cruel punishments upon slaves, considered as their property, like thieves, runaway slaves were branded on the forehead. Others were imprisoned. Many slaves died from mistreatment or imprisonment.

Slaves were not actually considered persons under the law, but the property of their owners. They could be sold, exchanged, given away, or seized to pay their master’s debt. A slave had no legal right to marriage, and slave cohabitation was regulated by their masters. As already noted, masters had almost unlimited power to punish their slaves. The Roman writer Juvenal told of a wealthy woman who ordered the crucifixion of a slave and refused to give any reason except her own good pleasure.

The law permitted a master to execute a rebellious slave, but Philemon was a Christian. If he forgave Onesimus, what would the other masters (and slaves) think? If he punished him, how would it affect his testimony? What a dilemma!

It is significant that the New Testament nowhere attacks slavery directly.  The message of Christ and the New Testament however, sowed the seeds of the destruction of slavery. It would be destroyed not by social upheaval, but by changed hearts. The book of Philemon illustrates that principle. Paul does not order Philemon to free Onesimus, or teach that slavery is evil. But by ordering Philemon to treat Onesimus as a brother (Philem. 16; cf. Eph. 6:9; Col. 4:1), Paul eliminated the abuses of slavery. Marvin Vincent comments, “The principles of the gospel not only curtailed [slavery’s] abuses, but destroyed the thing itself; for it could not exist without its abuses. To destroy its abuses was to destroy it” (Vincent, Philemon, p. 167).

One writer summed up the importance of Philemon in relation to slavery in these words:

The Epistle brings into vivid focus the whole problem of slavery in the Christian Church.  The apostle deals with the situation as it then exists. He takes it for granted that Philemon has a claim of ownership on Onesimus and leaves the position unchallenged. Yet in one significant phrase Paul transforms the character of the master-slave relationship. Onesimus is returning no longer as a slave but as a brother beloved (verse 16). It is clearly incongruous for a Christian master to “own” a brother in Christ in the contemporary sense of the word, and although the existing order of society could not be immediately changed by Christianity without a political revolution (which was clearly contrary to Christian principles), the Christian master-slave relationship was so transformed from within that it was bound to lead ultimately to the abolition of the system. (Donald Guthrie, New Testament Introduction [Downers Grove, Ill.: InterVarsity, 1970], p. 640)

Thank God for the power of Jesus Christ to change lives, communities and cultures!  Let’s never forget and lets’ keep spreading the gospel so no one is enslaved.